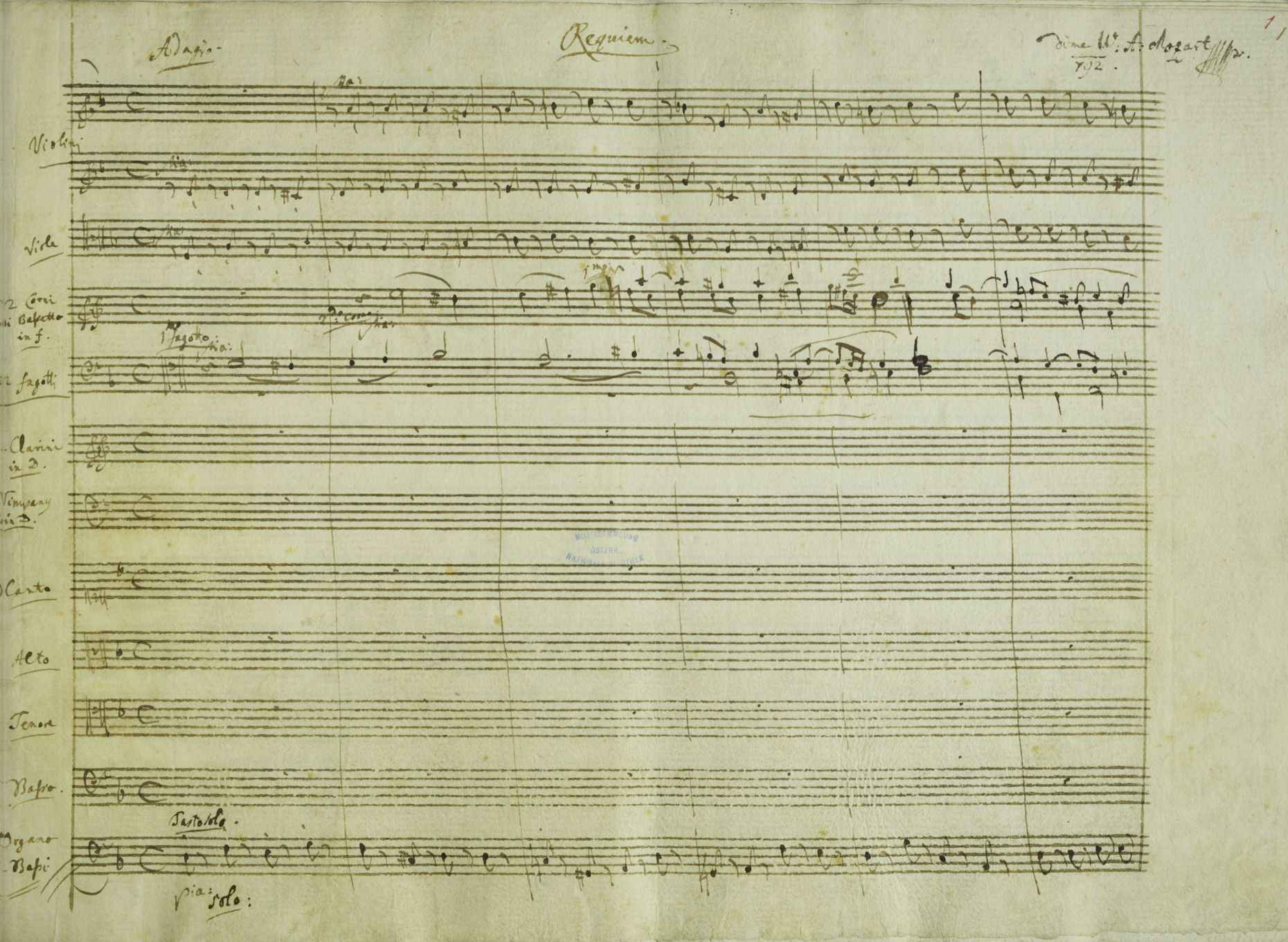 The Requiem Mass in D minor (K. 626) by Wolfgang Amadeus Mozart was composed in Vienna in 1791 and left unfinished at the composer's death on December 5.
A completion dated 1792 by Franz Xaver Süssmayr was delivered to Count Franz von Walsegg, who had anonymously commissioned the piece for a Requiem Mass to commemorate the February 14 anniversary of his wife's death.

The autograph manuscript (acquired by the Austrian National Library in 1831–1838) shows the finished and orchestrated Introit in Mozart's hand, as well as detailed drafts of the Kyrie and the sequence Dies Irae as far as the first eight bars of the "Lacrymosa" movement, and the Offertory. It cannot be shown to what extent Süssmayr may have depended on now lost "scraps of paper" for the remainder; he later claimed the Sanctus and Agnus Dei as his own. Walsegg probably intended to pass the Requiem off as his own composition, as he is known to have done with other works. This plan was frustrated by a public benefit performance for Mozart's widow Constanze. A modern contribution to the mythology is Peter Shaffer's 1979 play Amadeus, in which a mysterious messenger orders Mozart to write a requiem mass, giving no explanation for the order; Mozart (in the play) then comes to believe that the piece is meant to be the requiem mass for his own funeral.

At the time of Mozart's death on 5 December 1791, only the opening movement (Requiem aeternam) was completed in all of the orchestral and vocal parts. The following Kyrie and most of the sequence (from Dies Irae to Confutatis) were complete only in the vocal parts and the continuo (the figured organ bass), though occasionally some of the prominent orchestral parts were briefly indicated, such as the first violin part of the Rex tremendae and Confutatis and the musical bridges in the Recordare. The sixth movement of the sequence, the Lacrymosa, breaks off after only eight bars and was unfinished. The following two movements of the Offertorium were again partially done; the Domine Jesu Christe in the vocal parts and continuo (up until the fugue, which contains some indications of the violin part) and the Hostias in the vocal parts only.
Since the 1970s several musicologists, dissatisfied with the traditional "Süssmayr" completion, have attempted alternative completions of the Requiem.

This recording of Mozart Requiem is based on the 1965 Bärenreiter Urtext edition (BA 4538) .