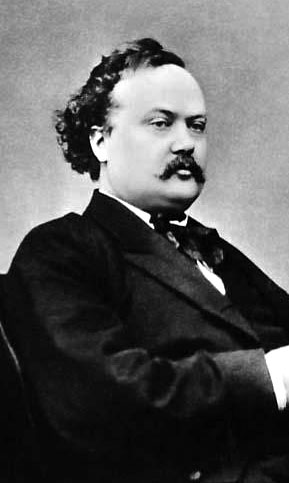 (Johan) August Söderman (17 July 1832 in Stockholm – 10 February 1876 in Stockholm) has traditionally been seen as the pre-eminent Swedish composer of the Romantic generation, known especially for his lieder and choral works, based on folk material, and for his theatre music, such as the incidental music to Ludvig Josephson's Marsk Stigs döttrar ("Marshal Stig's Daughter"), 1866, or his Svenskt festspel ("Swedish Festival Music").

The son of a musical father and a pupil of the Royal Swedish Academy in Stockholm, he studied piano, but mastered the oboe and violin as well. In 1856–57 he studied counterpoint at the Leipzig Conservatory with Hans Richter; there, in a musical culture that bore the imprint of Mendelssohn, he became familiar with the music of Robert Schumann and also with that of Richard Wagner. On his return to Stockholm he worked as a theatre conductor, and at the Royal Swedish Opera as choirmaster and eventually assistant conductor.

He wrote several operettas (The Devil’s First Try, 1856) and incidental music for about 80 plays, such as a Swedish translation of Schiller's Die Jungfrau von Orleans ("The Maid of Orleans"). His influence can be detected in the music of later Swedish Romantic composers, Hugo Alfvén and Wilhelm Peterson-Berger.

Söderman was only 44 when he died. His music is virtually unknown outside Sweden.