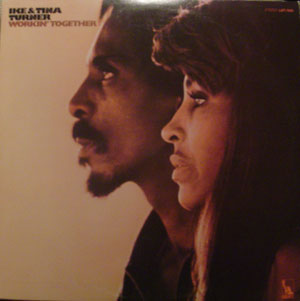 Workin' Together is a 1971 album recorded and released by Ike & Tina Turner on the Liberty Records label. Their second album with the label, it was also their most successful album to date. Much like their previous album, Come Together, the album featured several covers of rock songs and also featured renewed versions of previous Ike & Tina songs, which was a habit for the couple. The album featured the duo's biggest-selling hit, a funk rock styled cover of "Proud Mary" and also featured another popular Ike & Tina song, the Ike Turner & Alliene Bullock-composed "Funkier Than a Mosquita's Tweeter", later covered by Nina Simone. Several of the songs were written by Ike (including one by "Eki Renrut", which is Ike Turner's name backwards)and "The Way You Love Me" which was a song the Turners had recorded for their very first studio album together, The Soul of Ike & Tina Turner, a decade earlier.