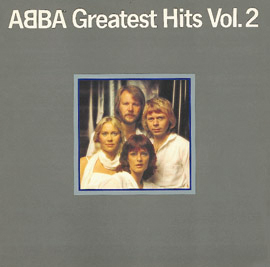 Greatest Hits Vol. 2 is a compilation album by Swedish pop group ABBA, released in October 1979 to coincide with their tour of North America and Europe (taking place between September and November 1979). It was ABBA's second chart-topping album of the year, the first being Voulez-Vous, and contained the brand new single "Gimme! Gimme! Gimme! (A Man After Midnight)", recorded in August 1979.

A round-up of ABBA’s hits since their first compilation album (released in 1975), the album exclusively included material recorded between the years 1976 and 1979 (albums Arrival, The Album and Voulez-Vous plus non-album single "Summer Night City") - with one exception, "Rock Me" from 1975 album ABBA, issued as a single and became a top 5 hit in Australia and New Zealand after the release of the band's first hits package Greatest Hits and also part of the setlist on the 1979 world tour.