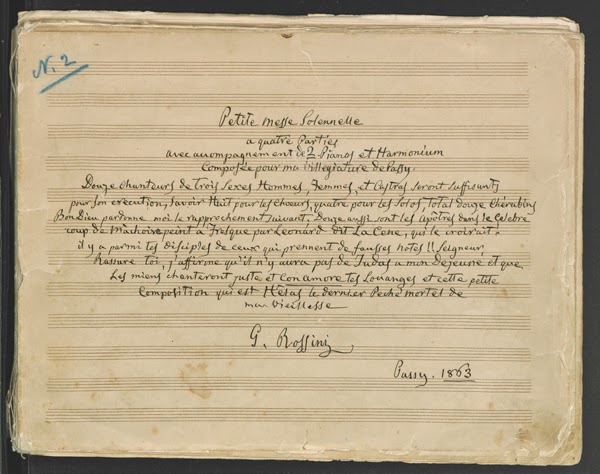 Rossini first composed the Mass in 1863, during his regular summer sojourn in his villa at Passy, in the suburbs of Paris. The autograph manuscript of the mass, preserved at the Fondazione Rossini of Pesaro, does indeed bear a total of three autograph dedications (one to the Countess Louise Pillet-Will and two addressed to “Bon Dieu”): all three are dated “Passy, 1863.” A more precise indication is found at the end of the Credo movement, which is signed and dated: “G. Rossini / Laus Deo (Passy) / 10 Juin 1863.”

The news that Rossini had completed a major sacred composition during the summer of 1863 caused a sensation. By August notice of the new work had even made its way across the Atlantic to New York, where the “Aesthetic Magazine” Once a Month (“devoted to music, painting, poetry, and kindred arts”) published this account:

Rossini has positively finished a grand mass with choruses, but declined to permit the execution of the work when asked by Baron Isidore-Justin-Sévérin Taylor, the President of the Association of Artist-Musicians in Paris. Is it a Requiem, and for whom is it destined?
Time will show."

Baron Taylor did not have to wait long: he was to be among those attending the first official performance of the Mass some eight months later.
Conceived for a total of twelve voices (four soloists, who also sing with the chorus, and eight additional choristers), the Mass was scored for two pianos and harmonium. While there is no evidence that it was actually commissioned by Rossini’s bankers and close personal friends, the Count and Countess Alexis and Louise Pillet-Will, the dedication of the Petite Messe solennelle to Countess Louise in the Pesaro autograph is dated “Passy, 1863,” and the work was first performed before an invited public at 10:00 P.M. on Monday, 14 March 1864.4 The occasion celebrated the consecration of a private chapel in the splendid new home constructed by the Count and Countess at 12, rue de Moncey.

The Count and Countess Pillet-Will and their family were intimate friends of Rossini from very early in his final stay in Paris, where he and his wife Olympe had arrived from Florence toward the end of May 1855. The next year, on his birthday, the composer wrote a lovely piano piece in the autograph album of Alexis’s father (still in the possession of the family), dedicating it: “A M.r Le Comte Frédéric Pillet-Will, son ami devoué, G. Rossini. Paris, ce 29 Février 1856.” During his final Parisian sojourn, Rossini’s financial affairs were largely handled by Alexis’s son, Michel-Frédéric Pillet-Will.

Although the performance of the Petite Messe solennelle on 14 March 1864 was by invitation only, information about it circulated widely in the Parisian press. The female soloists were two of Rossini’s favorite singers, the sisters Carlotta and Barbara Marchisio, respectively a soprano and a contralto, for whom the Paris Opéra had revived Rossini’s Semiramide (in French) in a noteworthy performance of 1860. They were joined by the tenor Italo Gardoni, who had created the role of Carlo in Verdi’s I masnadieri of 1847, and the well-known Belgian bass Louis Agniez (Luigi Agnesi). According to Jacques-Léopold Heugel, the chorus actually consisted of fifteen conservatory students, in addition to the four soloists, so that (despite Rossini’s instructions) nineteen singers were involved in the premiere of the work.8 The ensemble, conducted by Jules Cohen, included Georges Mathias as the principal pianist9 and Andrea Peruzzi on second piano, with the eighteen-year old Albert Lavignac, who was to become an influential theorist and educator at the Conservatoire, playing the “Harmonicorde-Debain.”